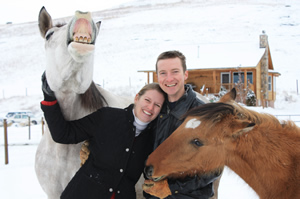 We have survived another year in Northern Montana!

To the right, you can see Liana (pregnant Trakehner mare), Anna, Ashton and Maple Pancake in front of our house.

Our ranch is still keeping us very occupied. We planted another 15 baby trees just in case we run out of oxygen. 😉 We added 500 feet of underground water pipes to add 4 hydrants all around our property.

The largest project we have done to date was building a new “Epic Barn!” With the help of many great neighbors and friends, we took down and rebuilt this 1000+ sq ft barn!

(You can see endless details on our AshtonAnna Blog. )

Anna’s Top Priority Trakehners is doing great. Liana (above) is pregnant (due 2010). They also purchased a new Trakehner named Elbe: an imported mare from Germany. She had a small meeting with Trakhener Breeders from Idaho and Montana, plus a special guest, Dr. Maren Engelhardt, a breeder from Germany.

Anna went for a 3 week apprenticeship with a Trakhner breeding farm in Florida and started showing the first horse she bred: Ossette.

On the nerd front, Ashton found a great group of web programmers in Montana. He has done a few presentations on topics like CSS and Search Engine Optimization. He’s learned a lot and found some more great friends.

Ashton’s Websites in a Flash business is still doing great, starting out the year with a brand new website re-design and another consistent highest-ever income year. The more he learns, the more he realizes that the learning curve for web developers never really ends.

Here’s a collection of my favorite posts from 2009:

Sledding on our neighbor’s hill

Digging a Moat around our house